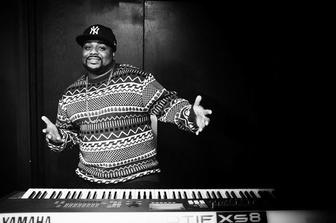 Jarreau Pitts is a Keyboardist, Producer, Writer, Arranger, Engineer, and Music Director.  Growing up in a musical home where his father, Marcus Pitts, instilled at a young age the importance of music, it is no surprise all three of the Pitts brothers have pursued music in some form into adulthood.  Jarreau, who started learning piano from his father, continued to hone his skill, and soon after had the chance to study from Jazz Joyner, a multi faceted musician himself and currently the MD from JOE.  Before age 20, Jarreau had been seen playing at various events around the city of Springfield, Massachusetts and the surrounding towns.

Over the years Jarreau has worked with numerous artists in varying capacities including Kaci Battaglia, Natalie "Redd" McKnight, Intercession, The Wannabes, Michelle Brooks-Thompson, and many more!  Jarreau is also a co-founder, producer, and musician for Pitts Campaign Music - the musical culmination of the three Pitts Brothers.  He is also a founding member of Red Wall Group Inc. and Give Music Inc. - Both organizations working towards bringing music back to being a focal point of communities, both locally and regionally.  Having put on events such as Faith Festival and partnering with the Springfield Business Improvement District for Jam Fest 2017, it is more than obvious that Jarreau is a dedicated individual focused on a continued career doing what he loves - making music, and bringing that music to the people!