Twenty-four year old drummer, Ashdon Reynolds, is a gifted musician.  He is often called by his nickname, "Metronome", by his band mates.

In 2012, while still attending the Springfield High School of Science and Technology, Ashdon, along with a few other select students, has the opportunity to perform in Washington D.C. for President Barack Obama for an Education Summit Event.  Ashdon has worked with the DMJ United Voices of Praise Choir, under the direction of Elder Terrence Haynes.  He has also played under the patriarchy of Pastor Zachary Reynolds, and Arch Bishop Timothy Paul Baymon.

During his years playing in various churches, Ashdon also marched with the Springfield Targets Drum and Bugle Corps, competing in the DCI program and traveling across the country.  He is credited by the Corps with being the only bass drummer to be able to execute snare drum rudiments.  It was during this time spend with the Targets that Ashdon learned how to read music.  Following his 7 years with the Targets, He spent 3 years marching with the DCA affiliated Excelsior Drum and Bugle Corps based in New York.

Ashdon has performed at various venues across the country with drum corps, and other groups.  He has shared the stage with many notable musicians such as - Alex "Mr. Bass Man" Moran, Ace Livingston, Abi Robles, Jo Sallins, Jarreau Pitts, Nichelle Mungo, Kevin Sharpe and more.

Currently Ashdon is a working as the drummer for Michelle Brooks-Thompson (Season 3 finalist on NBC's The Voice), and the Jeremy Turgeon Quintet. 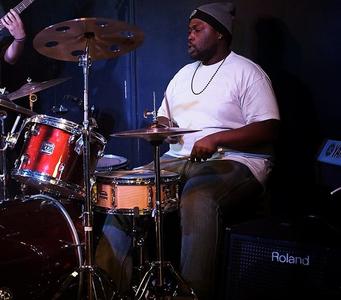